Trade the deep earth tones of your safari clothing for your bathing suit. Safari grasslands, rusty earth, and animals uncannily blending into their environment are swapped for turquoise waters—so striking against white sand beaches, and aromatic smells of the spices of cloves, cinnamon, nutmeg, turmeric, black pepper, and lemongrass that stimulate the senses.
Explore this Extension
"
Home » Journeys » Extensions » Safari & Zanzibar Extension

For the absolute best of everything Africa has to offer, choose the Safari and Zanzibar extension. Climb the giant, spot the Big Five, and get your perfect beach vacation to top it all off. This extension is truly the experience of a lifetime. 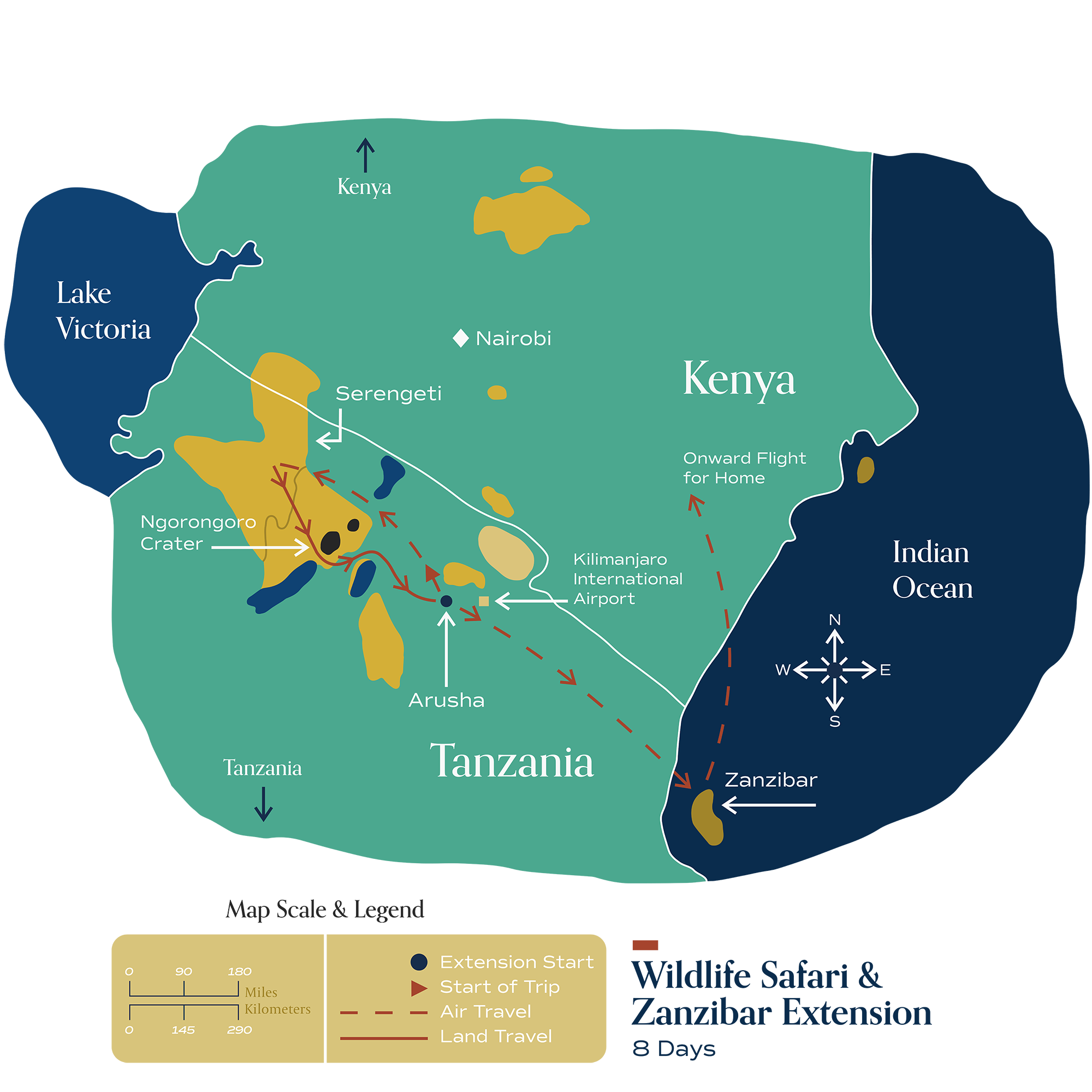 You are filled with a sense of accomplishment after climbing Kilimanjaro and the joy that your adventure is not yet over! Fly deep this morning into Serengeti National Park. There is no predicting what will happen next on your epic life-changing adventure and you have the best seats in the house for unparalleled game viewing opportunities. The Serengeti is perhaps the most impressive wildlife sanctuary in the world and has more large animals than any other protected area on earth. On the Serengeti Plain live an estimated 2,500 lions and there are more cheetahs here than anywhere else in Africa. Hyenas, wildebeests, zebras, gazelles, ostriches, hippos, and other animals can be seen in abundance. Back at your luxury tented camp—where relaxation and romance dance together in one of the most beautiful settings imaginable—soak up all of the wide-open breathing space that is often lost in our usual day-to-day existence back home.

Covering more than 5,700 square miles, the Serengeti is breathtaking terrain composed of acacia savannah, grass plains, and dense woodland grouped around kopje rock formations standing in a sea of grass. The kopjes provide shelter to a great variety of plants and animals, from the elusive leopard to the tiny dik-dik. It is estimated that one million animals live in the area with more than one-third of them being wildebeests making it arguably the greatest wildlife theater on earth.

The Safari doesn’t stop as you leave the Serengeti National Park bound for Ngorongoro Crater. Ngorongoro is the largest intact caldera (collapsed volcano) in the world and has the highest concentration of animals in Africa. Maasai Warriors wear bright red shawls and stand out against the deep browns and earthly greens of the landscape. You may see young boys with their faces painted white wearing black shawls in groups of three or four walking the roadside, having recently experienced a rite of passage. En route to Ngorongoro, stop at Olduvai Gorge and walk to the bottom where Mary Leaky discovered the remains of Australopithecus Homo Habilis and Homo Erectus. Contemplating the breath of time of mankind’s evolution is humbling, if not incomprehensible. As you walk down to the gorge floor, every step makes you feel like you are walking backward into primordial time. It is hard for us to appreciate time beyond two or three generations, much less the millions of years we are witnessing being unraveled before us as we walk down to the excavated bottom of Olduvai Gorge.

As you wind up to the crater rim lush green foliage is dusted with the same mist of the brick-red earth and contrasts with the white mist of the clouds that shroud the volcano. Maasai tend their herds. Villagers carry firewood or water on their heads, instinctively keeping an eye out for an elephant or other animals that could come out of the bush at any moment. Arriving at the crater rim you get out of the vehicle and look out over the expanse of the crater below. This is the largest collapsed caldera in the world. Spirits are lifted by the beauty and grandeur of this place. A moment frozen in time just before the exciting wildlife encounters that await you. The animals are only specks for now, nearly 2,000 feet below. The perspective is foreign and gives us a sense of timelessness.

Drive down the 1900-foot crater wall from the rim of this spectacular extinct volcano. Here you will find Africa’s largest permanent concentration of wildlife. Ngorongoro has been referred to as the “Eighth Wonder of the World.” It towers above the Northern Serengeti Plain and it is celebrated as containing some of the most magnificent scenery in the world. Ngorongoro’s 105-square-mile crater is the largest unbroken crater on Earth and is packed with just about every species of wildlife found in East Africa. It is possible that we will see the Big Five—all of them—in one day. Large plains game permanently inhabit the area and the scenery is sensational. Some 30,000 animals live in the crater and, because the grasses are short, game is easily spotted and can often be approached quite closely. It is also one of the few parks in Africa where rhinos are relatively easy to locate. Enjoy the awe-inspiring views from your lodge of the crater below (weather permitting), spying herds of buffaloes and wildebeests that look like ants from the distance.

En route to Zanzibar Island via air, keep an eye out for Mount Kilimanjaro, on top of which you stood just days ago. Known as the Spice Island, Zanzibar is a completely different side of Africa where culture and history runs deep and the aromatic smells of the spices of cloves, cinnamon, nutmeg, turmeric, black pepper, and lemongrass stimulate the senses. After your wonderful days on safari, relaxing along white sand beaches with coral reefs and palms swaying in the sea breeze brings your experience to new heights. It’s time to dream and completely relax—a welcome reprieve and so different from how we lead our lives back home. Life is put in perspective and time seems to stand still.

Enjoy water activities, go on spice tours, and visit fabled Stone Town—a world Heritage Site. Zanzibar is an archipelago made up of Zanzibar, Pemba Islands, and several islets. It is located in the Indian Ocean, about 25 miles from the Tanzanian coast and 6° south of the equator. Zanzibar Island is 60 miles long and 20 miles wide, occupying a total area of approximately 650 square miles. Mostly, Zanzibar is a place to relax and enjoy a completely different side of Africa.

Enjoy another relaxing morning on Zanzibar before transferring to the airport for your flight back to Arusha, Dar Es Salaam, or Nairobi to connect with your onward flight home. The tranquility and beauty of Zanzibar have blended with the rigors of the mountain and the wildlife experiences on safari have resonated deep in your soul. It is time to leave Africa but Africa is not ready to leave you.

Is it really possible to climb Kilimanjaro and to do all of this in just 18 days on the ground in Africa?

The answer is not only yes, but we have built in extra time to acclimatize and give you the best possible chance of success to reach the summit of Kilimanjaro. You will also have time for safari adventures and to enjoy your time at the lodges and camps, and plenty of time to walk along the beaches of Zanzibar.

How will this trip help me in my life?

Travel changes us. It could be a great source of inspiration for your life and for others you bring with you. The contrast of experience between climbing the highest mountain in Africa, seeing the vast expanse on the open plains and the bountiful wildlife of the Serengeti, and the beauty of Zanzibar, is life-changing. The gentleness, joy, and hospitality of the people puts everything into perspective and provides a new way to look at the way we lead our lives back home.

What is the best part of the safari experience?

Going into lands of raw beauty that haven’t changed for eons, seeing animals in their natural, unscripted state, and feeling the wind at your face as you drive through the Serengeti. You never know what you are going to see, hear, and experience. An African safari is about as great as a travel experience as one could have to add to their own great life story.

What are the best parts about going on an adventure of this kind?

Many of our clients have said it is the first time in their adult life that they didn’t have to worry about a thing and could completely decompress. Leaving our busy lives behind to get recharged and gain a fresh perspective on life. A sense of accomplishment. Spending such uninterrupted quality time with family and/or friends, meeting personal challenges, and coming back having gone through such an enlightened experience is life-altering.

“I hope you have an experience that alters the course of your life because, after Africa, nothing has ever been the same” – Suzanne Evans

Pair this extension with one of these journeys for an adventure you won’t ever forget. 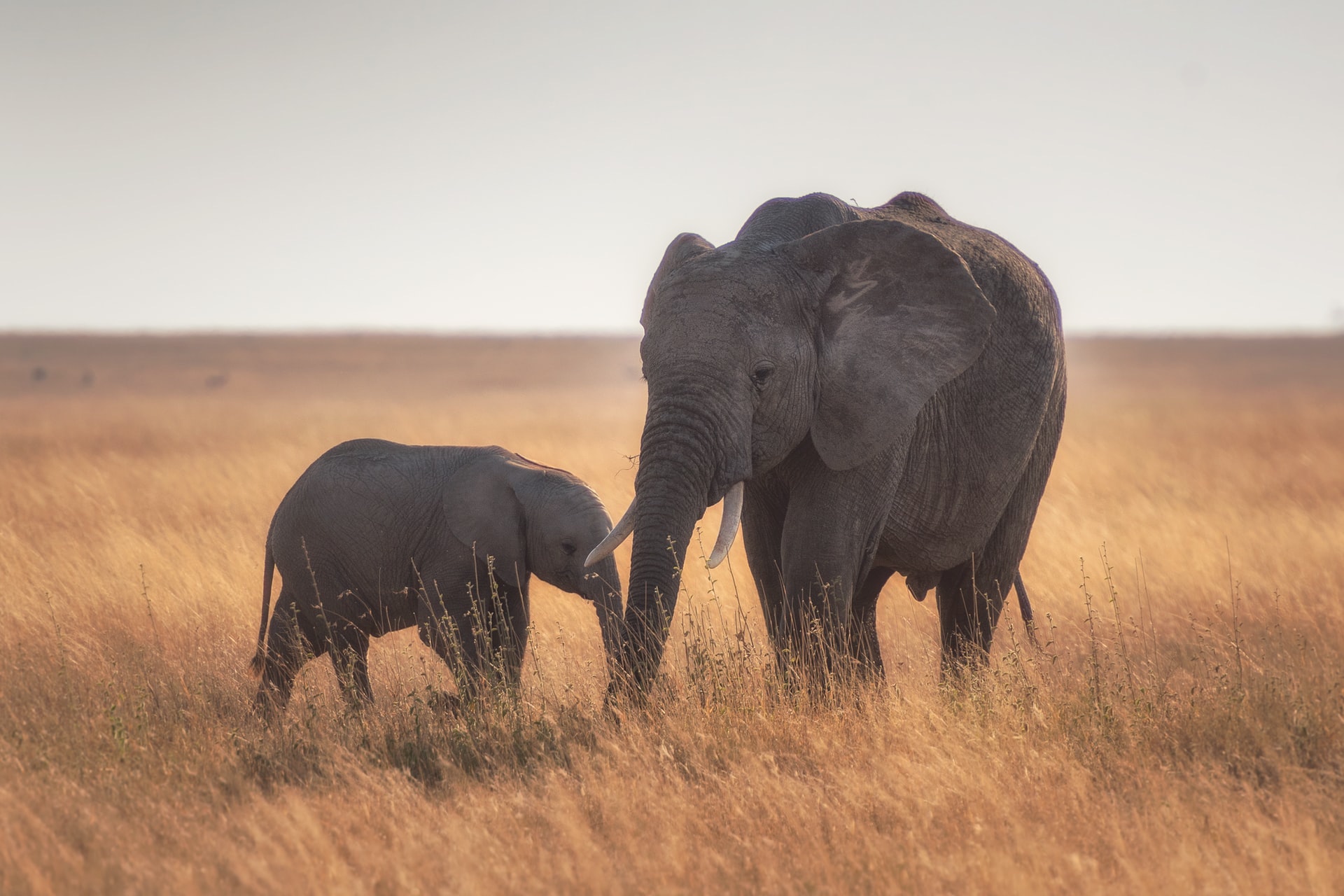 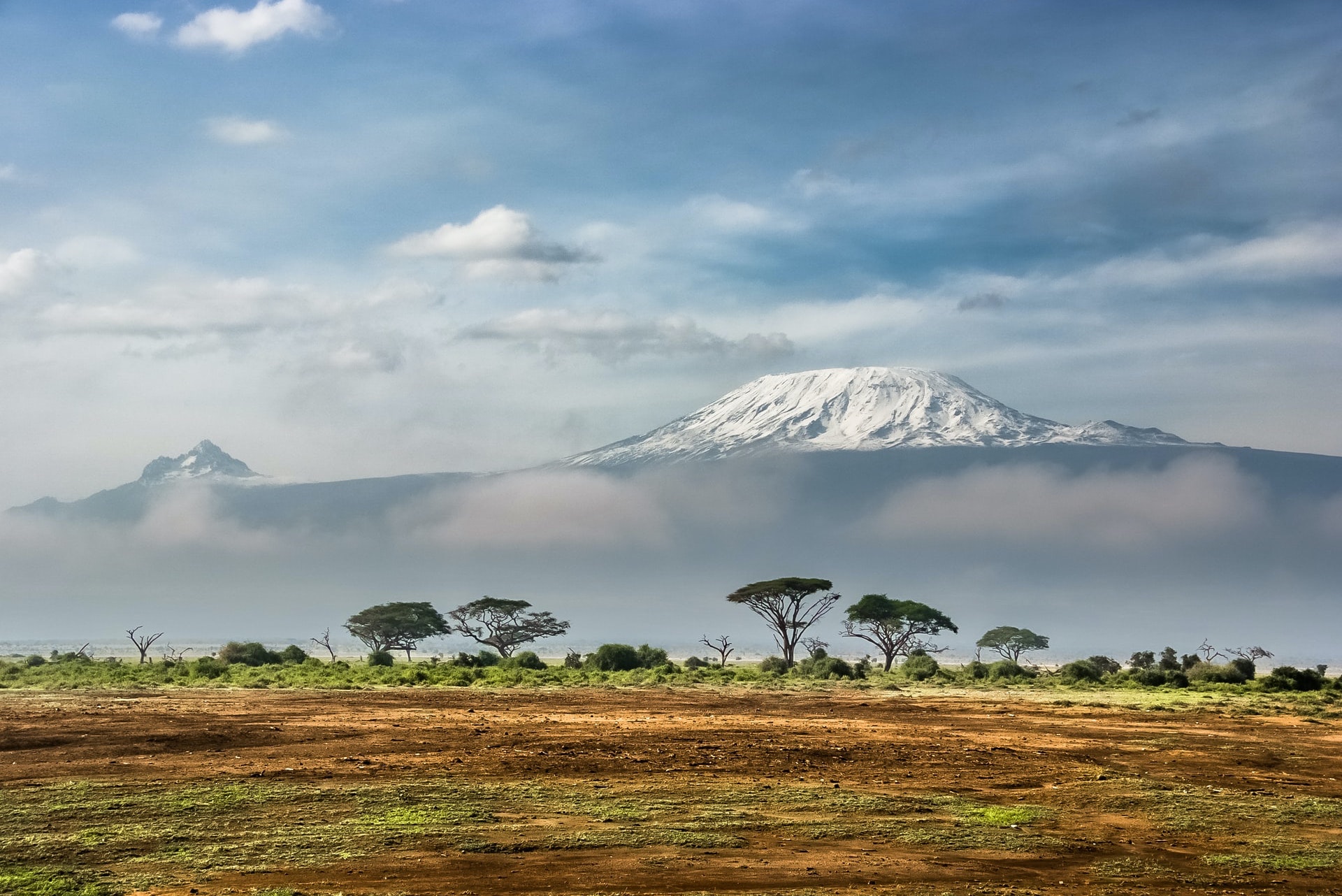 Above the Shadow of the Giant

Let's design a custom journey just for you. →